When the watch has been jeopardized (as most watches were prone to back then), he needed to rely on alternative means for timekeeping, or abort the dive to prevent decompression illness (or worse). Additionally, it is probably worth pointing out that such a safeguard is admittedly somewhat silly within an ultra-modern dive watch that’s already water-resistant to some crushing 300 meters (and costs $14k), but the allure of this Blancpain Tribute to Fifty Fathoms Mil-Spec is not its usefulness, but its commendable devotion to the origin material.Speaking of source material, although the case size to the Blancpain Tribute to Fifty Fathoms Mil-Spec has been increased from 37mm to 40mm, it’s still a merciful decrease from the last time we saw a Tribute to Fifty Fathoms, which managed to actually wear larger than its sacrilegious 45mm situation thickness. This 40mm instance is actually the sweet spot for Blancpain sailors such as the Mil-Spec, which finally strikes that nice balance between carrying the highly polished visual weight of being a modern “luxury diver” while still remaining true to Fiechter’s original vision. If that is a harbinger of what is to come for the next generation of Blancpain’s Fifty Fathoms collection, consider us fans. 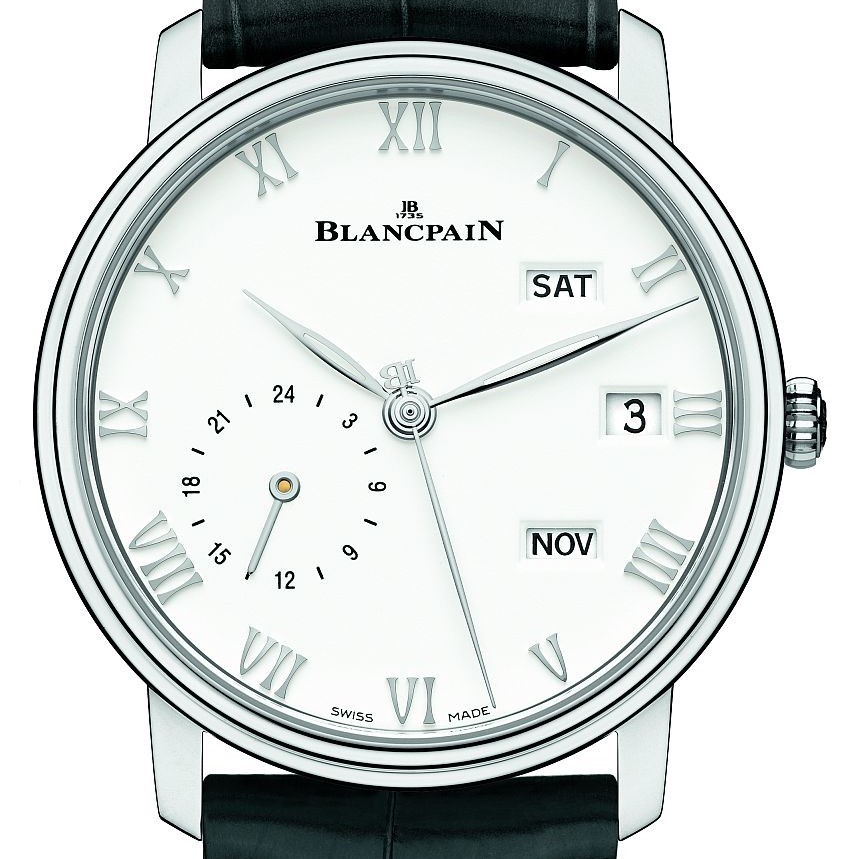 For Baselworld 2016, Blancpain is introducing a stainless steel version of their Villeret Quantième Annuel GMT watch, providing a cleaner and more contemporary look. When I’ve looked at this watch in passing as someone rather fond of GMT complications, it took me some time to figure out why the Blancpain Villeret Quantième Annuel GMT just wasn’t giving me the same feeling I get from most GMT watches. Then something clicked in my conscious, and I was sucked in. Basically, it’s because this is a GMT watch that, well, does not look like a GMT watch. Without that additional central hand and accompanying scale, it would be easy to misinterpret the GMT sub dial at 8 o’clock as a sub-seconds dial. Of course, the lack of movement and the scale betrays that, but still… 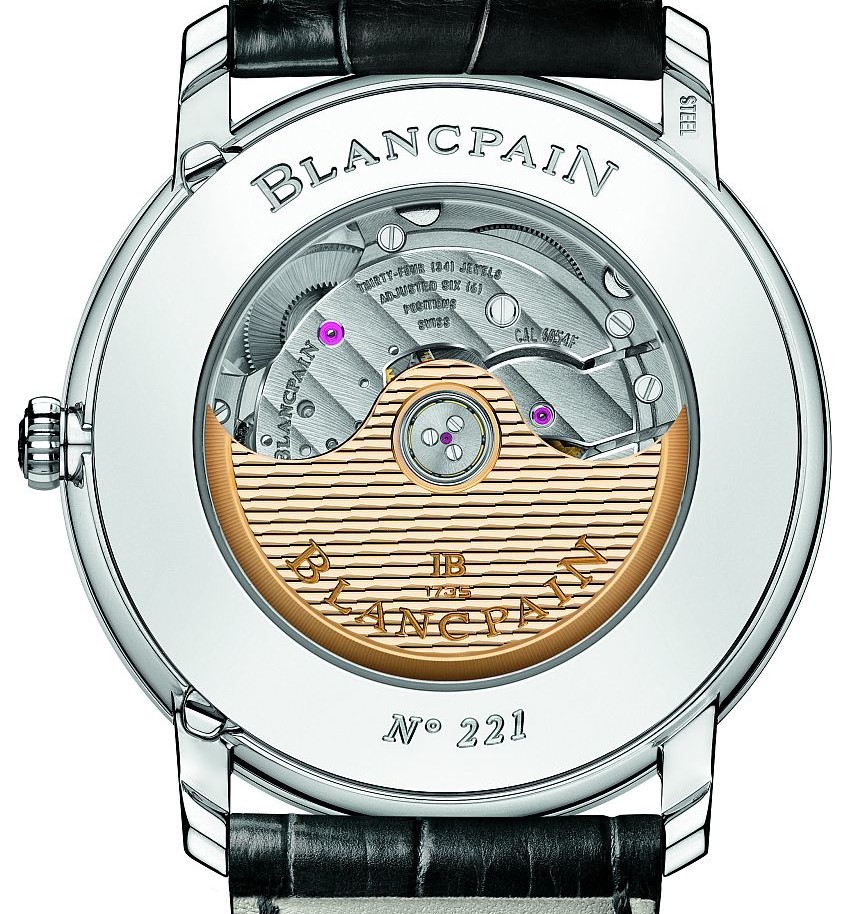 For me, that is the hook with the Blancpain Villeret Quantième Annuel GMT, in that it sort of hides it’s functionality in plain sight. Then we get into the other complications on the watch. Along with time and GMT time, calendar-related stuff is high on my list of usable functions on a watch; here, on the Blancpain Villeret Quantième Annuel GMT, we have an annual calendar complication. This complication requires adjusting the calendar once between February and March, as opposed to a perpetual calendar where that wouldn’t be necessary. 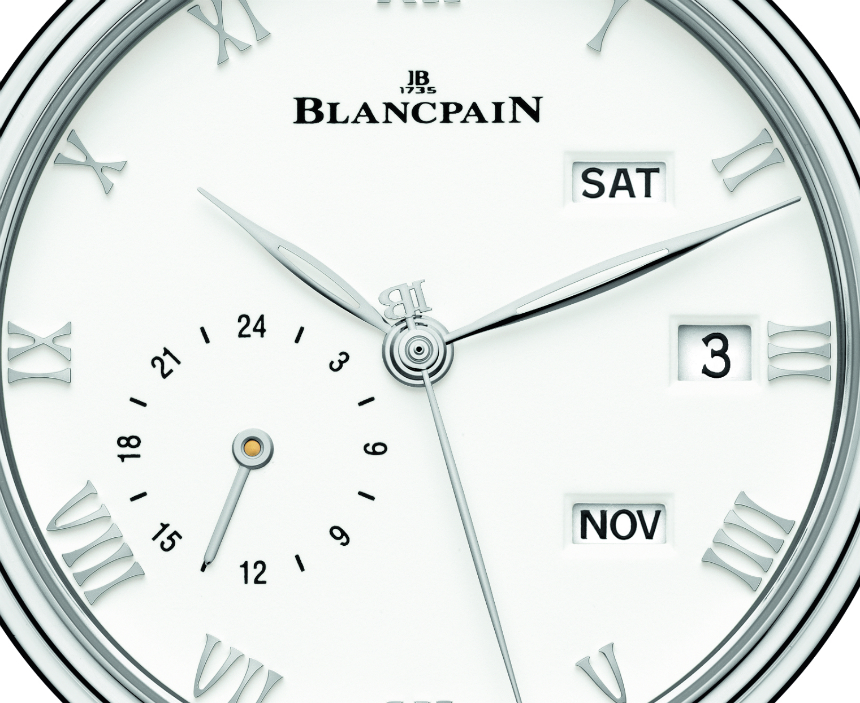 Now, this sort of complication is not something new or rare. On the Blancpain Villeret Quantième Annuel GMT, what stood out for me is, first, how the display windows are implemented. The date shows up at the normal position, but the day and month take up non-standard positions on the dial, rather than just up at the top. Yes, this unbalances the dial a little bit, but I’ll give that a pass for the uniqueness of the execution. The second thing that stood out for me was where Blancpain put the adjustment pushers. Rather than having these on the left side of the case, they actually hid them under the lugs.

This is a clever option, and I am surprised more brands have not tried this. By putting the calendar adjustment pushers of the Blancpain Villeret Quantième Annuel GMT under the lugs, we are left with a very clean case. Frankly, you will not be fiddling with those pushers very much, provided you keep the watch wound, so why not tuck them away where they are not noticeable?

So far, it would be fair to say that we have not discussed much with the Blancpain Villeret Quantième Annuel GMT that has not appeared for the line already – so what’s new for BaselWorld? Here, it’s the case material. This is the first time that the 40mm case has appeared in stainless steel. Paired to a white dial and black alligator strap (22mm, for those wondering), you have a very classic sort of a look in terms of the color palette. If, for some reason, you want a splash of color, you will get that via the exhibition case back, where you can see the decorated rotor in yellow gold.