During the 18th century, when nations in Europe were racing to conquer new territories, naval power was instrumental in that objective. Of all the nations involved in that game, the British were way ahead from any other nation due to cutting edge technologies which that country possesses. One small key technology that Britain had that allowed her ships to sail the seven seas were accurate marine chronometers which allowed mariners to determine the longitude on voyages. The maker of choice was Arnold & Son. The Royal Navy, which holds sway as the strongest navy in the world for two centuries became the brand’s most important customer. This endorsement sealed Arnold & Son’s reputation as a watchmaker of the highest order.

To celebrate this important heritage, the company has created the Arnold & Son Eight-Day Royal Navy. 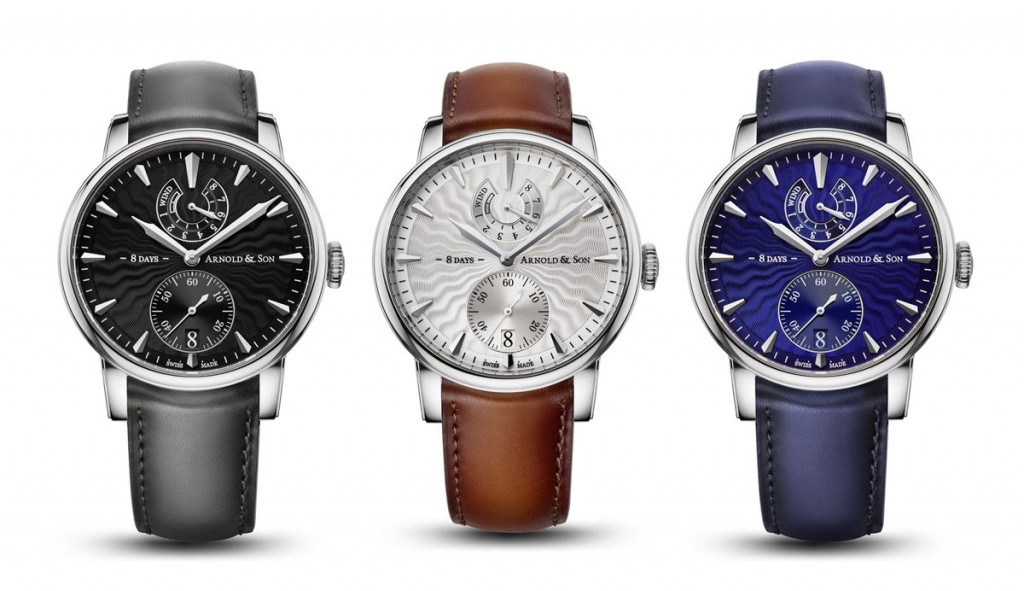 Made out of stainless steel, this new model is available with a choice of three different dials colours; silver grey 1EDAS.S01A.D135A, black anthracite 1EDAS.B01A.D134A or royal blue 1EDAS.U01A.D136A. A calfskin strap with the corresponding colour to dial completes the package. All three dials have a wavy sub-burst effect that is mesmerizing.

Each watch measures 43 mm in diameter with a height of 10.7 mm. Viewed from the side, the casing has a slight cone-shaped that is stepped and tapers from top to bottom. Protecting the dial is an anti-reflective sapphire crystal. The case back is also covered by a sapphire crystal. 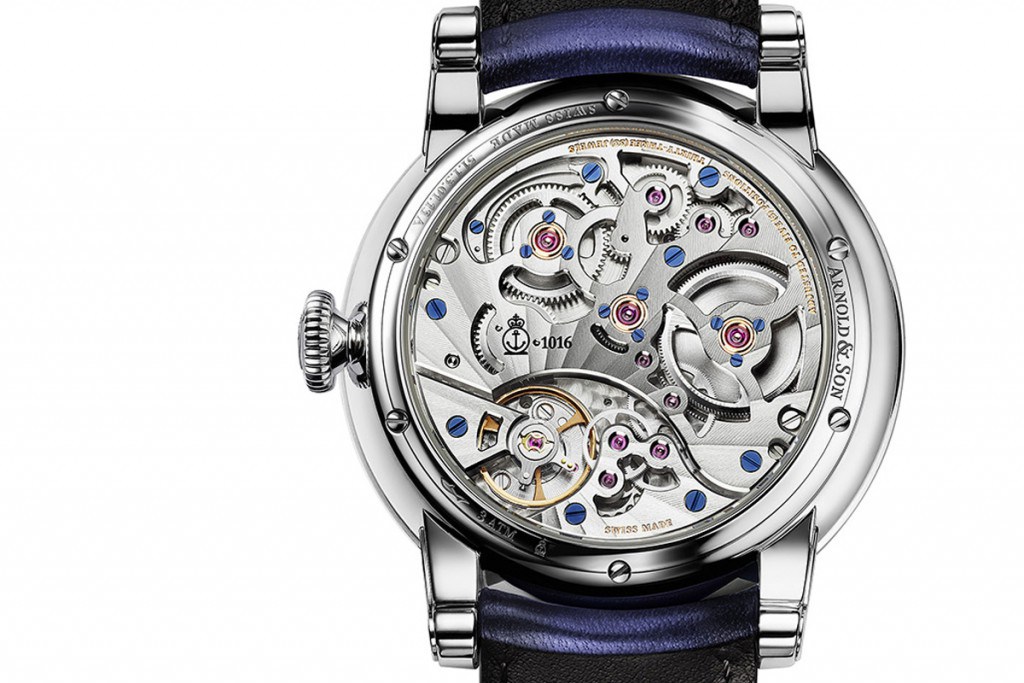 The engine that powers the Eight-Day Royal Navy is a newly developed and manufactured by Arnold & Son in-house eight-day power reserve winding movement – the A&S1016. This Calibre has twin barrel main-springs mounted in parallel. Viewed from the displace case back, main plates have wide gaps that allow you see the escapement, barrels and wheels. The surfaces on the Calibre have Geneva stripes, rhodium plated and edges are chambered and polished. The screws are blued and the main jewels are set in solid 18-carat gold chatons. Although this movement is large at 33 mm in diameter, despite the twin barrel main-springs, it is thin at just 4.7 mm. This is truly an engineering feat.

As a collector, I can appreciate and understand why Arnold & Son designed the Eight-Day Royal Navy the way it is. Keeping every complication on a North/South alignment reflects the historical linkage to the maritime need to find longitude (it also makes the watch symmetrical which I like). The design of a winding movement is also keeping to the tradition of the old marine chronometers. The power reserve indicator provides the visual cue to users to keep track on the power available in the main springs. My only design input to enhance the watch further would be a special gimbaled balanced display watch box that allows the wristwatch to be displayed like a marine chronometer in a ship. Something similar to the 2012 limited edition Hamilton Khaki Navy Pioneer.

Overall, I like the symmetry and the clean dial. If given a choice I’ll go for the blue dial.

Once set, the accuracy should hold for 122 decades, and a simple adjustment will ensure it for another 122 decades. The hand-wound motion is an Arnold & Son manufacture A&S1512 which defeats at 21,600 bph with a 90-hour power reserve. As if the case back weren’t beautiful enough, the C?tes de Genève shown throughout the movement is just lovely.The Arnold & Son HM Dual Hemisphere Perpetual Moon includes a black or brownish hand-stitched alligator strap and is sure to grab the attention of many a watch buff. The Arnold & Son HM Double Hemisphere Perpetual Moon watch is priced at $30,500. When attempting to solve a problem, the start is always a good place to get started. That is precisely the process followed by Arnold & Son in their endeavor to get rid of isochronal mistake from among their newest pieces, the Arnold & Son Continuous Force Tourbillon. Arnold & Son’s heritage is present in the legacy of John Arnold and his son, two of the most important watchmakers to come out of England. Having packed his son off to learn in the back of the Swiss maestro, Arnold turned his attentions to the problem of these times: the quest for chronometric accuracy at sea.

Meor Amri is a passionate watch collector from Kuala Lumpur, Malaysia. Having bitten by the horology bug in 2010, he has written extensively about the watch scene and has assembled a large collection of watches (excessively!!!) on his own free time. His blogs on the same subject are: Eastern Watch & Western Watch Read his articles here