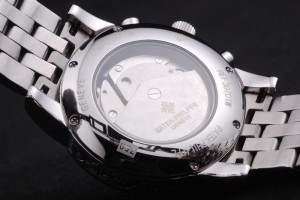 Located on the outskirts of Geneva, this complex with the name of Plan-les-Ouates and built in 1996 has undergone enormous changes in its appearance in the past nine weeks. In temporary buildings designed carefully, the space between independent wings of the workshop was transformed into a towering celebration hall, containing a stage, a video projection wall, a double-store reception area with a restaurant and an exhibition area.

Here, 3,600 media reporters, VIPs, retailers and business partners invited from around the world have watch the grand celebration performances in six consecutive nights, absolutely worth their time spent. Honorary Chairman of Patek Philippe, Philippe Stern and his son, current president of Copy Patek Philippe, Thierry Stern welcomed guests at this spot. The guests were treated to a light show in 3D, which presents the major milestone events and pioneering timepieces of Patek Philippe. The charming music and ballet performances on the stage about 20 meters wide also added to the excellence of the entire show.