2014 was the year of steel for Patek Philippe replica watches. Close by the enormous amazement of the lively Annual Calendar Chronograph 5960/1, we at Monochrome Watches exhibited you, in a broad hands-on article, the new Nautilus Travel Time Chronograph ref. 5990/1A, a confused release of the Gérald Genta-planned symbol. In any case, even with this late pattern toward steel (which was in answer to a few gatherers’ solicitations), we shouldn’t overlook that Patek’s strength is dress and muddled watches. One from the 2014 gathering especially snatched our consideration, the Patek Philippe 5496P-014 Perpetual Calendar Retrograde, with its new “nectar cocoa” dial and particular format, which could be portrayed as “controlled capriciousness” in a generally extremely conventional world. 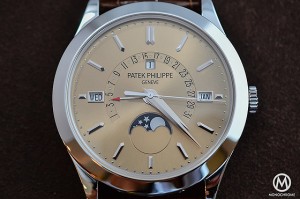 The Patek Philippe 5496P isn’t generally “another” watch, as it had as of now been displayed at Baselworld 2011 with a white dial. Likewise, the development and its entirely strange format is not particular to this reference, as the Caliber 324 S QR was at that point controlling the 5159. The last was by one means or another a standout amongst the most “out of the way” watches in Patek’s accumulation in those days (aside from a couple of exceptionally uncommon and constrained releases). It accompanied an officer’s case (which means straight drags with screws as an afterthought and a pivoted dust spread on the rear), a guilloché dial with extensive Roman numerals, and unordinary hands. In 2011, the primary release of the 5496P was a milder and more calm adaptation of that format, with its Calatrava case and “immaculate” dial plan. For 2014, Patek Philippe brings back – in its standard thing, fairly saved style – a touch of whimsy, a warm and wonderful shading Patek calls “nectar cocoa.”

The dial format itself could be viewed as “off the beaten path” for a Patek Philippe watch, as we are accustomed to seeing Patek Philippe Perpetual Calendars with three subdials – like, for instance, the notable reference 5140. Keep in mind that we are discussing a brand work around custom and style. What might be viewed as an aggregate absence of inventiveness in another, more youthful brand must be found with regards to a standout amongst the most traditionalist – in the best feeling of the word – makes. Patek Philippe does not make MB&Fs of Urwerks. It does refined and established watches, with polish and soberness. Along these lines, as it were, this format is less moderate. 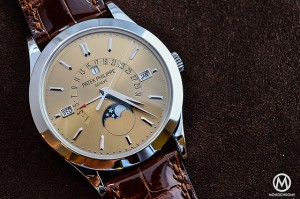 In the lower part of the dial sits the moon-stage marker, spoke to with a blue plate and silver printings for the moon and stars. The never-ending date-book’s signs are shown in three openings: day at 9 o’clock, month at 3 o’clock, and jump year at 12 o’clock. The date is shown by a retrograde hand that focuses to a scale between 7 o”clock and 4 o’clock. Time is traditionally shown by dauphine hands in the focal point of the dial.

At the point when the main Patek Philippe Ref. 5496P was exhibited, with its white dial, it was surely a rich watch yet with, by one means or another, an absence of nerve, a specific starkness. The new shading brings a hotter tasteful without breaking the traditional codes of the brand. The “nectar cocoa” dial is absolutely less routine, yet it has a great deal of appeal. Because of the dial’s sunray design, it goes from a delicate caramel tone to a more sunny, overlaid look contingent upon how light reflects off of it. However there is no garishness here, only an additional layer of limited creativity. The other point of preference of this shading is that it makes a higher appear differently in relation to the cleaned white-gold hands and records, while the gaps of the day, month, and jump year pop out obviously from the dial itself. 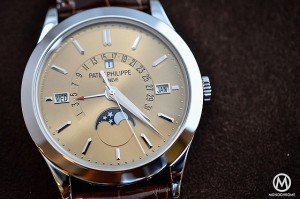 The case is in the conventional Patek Philippe Calatrava style, with its inclined bezel and level case-groups. It is made of platinum (similar to the white-dial version) as the jewel set at 6 o’clock, between the drags, can bear witness to. Every one of the settings are made with recessed pushers incorporated between the carries or beside the crown. These take out the requirement for any exasperating catches or pushers, and in this manner keep the case plan unadulterated. The Patek Philippe Ref. 5496P has extremely sensible measurements — 39.5 mm in breadth and 11.19 mm in stature – which add to the dressy feeling and to the solace. On the wrist, the vast opening for the dial and the straightforward outline of the case marginally complement the extent of the watch, giving it an extremely charming nearness. Furthermore, at the end of the day, no stresses — it is never excessively garish. 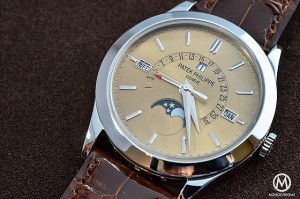 Through the sapphire caseback (exchangeable with a strong back), the wearer can watch the development with its appealing format and fine wrapping up. Dissimilar to the famous Ref. 5140, which contains with the ultra-slim Caliber 240 Q with miniaturized scale rotor, the Patek Philippe Ref. 5496P is controlled by Caliber 324 S QR. We can expect that these initials allude to the breadth focal seconds (the “S”), the ceaseless schedule (the “Q” for quantième, i.e. “schedule” in French) and theretrograde hand (the “R”). The base development, Patek’s Caliber 324, has a self-twisting instrument with a focal rotor, brags a 45-hour power hold and accompanies the standard, yet effective, Gyromax parity wheel – a free-sprung equalization wheel created by Patek Philippe that brings a decent chronometric rate. The never-ending date-book is a module included top of the base development. The aggregate stature of this “motor” is extremely sensible, notwithstanding: just 5.35 mm. 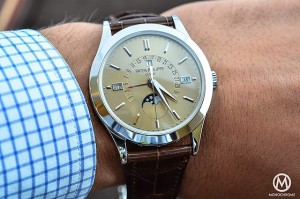 The completing is, obviously, in accordance with what you’d anticipate from Patek Philippe: hand-cleaned, sloped points, Geneva stripes on the extensions and roundabout graining on the fundamental plate, cleaned screw heads and a few gold chatons around the rubies. The rotor, in strong yellow gold, is likewise extremely all around completed, with round Geneva stripes and a pleasant etching. This abnormal state of subtle element is ensured by the Patek Philippe Seal (a kind of enhanced and in-house Geneva Seal).

The Patek Philippe Ref. 5496P-014 is an extremely refined and traditional watch, no doubt, however with a minor piece of whimsy – because of its dial’s outline and shading – that we truly acknowledge here at Monochrome-Watches. A long way from being ostentatious or unwearable, it is a warm and rich watch, but sufficiently convoluted to satisfy the desires we have of a Patek Philippe watch.